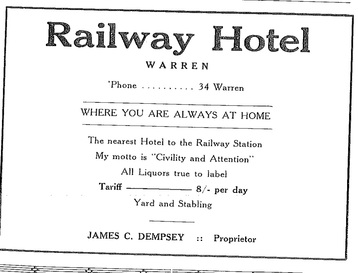 In early 1898 the licensing magistrate in Warren approved for the
proposed building of the Railway Hotel on the corner of Chester St, in the
middle of town. The hotel was planned to contain 26 rooms in the main buildings,
with elaborate out buildings to be completed by November 1898 where the first
tenant James Gale, would commence trading in the hotel.

The Railway hotel was believed to be a popular area for the
Chinese citizens of Warren due to its proximity to their living quarters, but
also housed a popular area for travelling citizens to stay and drink when
passing through. After three years of running the hotel, James handed over the
business to a Mr Fred Scherf, who ran the inn successfully until 1912 where he
leased the premises to L.U. Connell, of which led to the eventual takeover of
the hotel by Eugene Shore. After changing hands multiple times from 1921 to
1962, between approximately 6 tenants, the Railway Hotel was largely destroyed
by fire during July, where a temporary bar was created in the remaining portion
of the hotel.

Eventually, the Railway Hotel passed into the hands of the Warren
Council who destroyed and converted the remaining hotel into a modern motel
without a bar, and was renamed the “Warren Motor Inn,” which still stands today
as one of the main motels in Warren.